Oliver’s grandfather, J.M. Tan was a true visionary and patriot as well as a key figure in modern Chinese politics. Devoted to the development of China in the early 20th Century, J.M. Tan founded an accounting firm in Shanghai after graduating from Cambridge University and qualifying as an accountant in England. His sense of National pride was further reinforced during the Second World War when Japan invaded China. Devoted to raising finances for China's war effort, J.M. Tan befriended and joined forces with Liao Chengzhi ( 廖承志 ) and Madam Song Qing Ling ( 宋庆龄 ). J.M. Tan was eventually entrusted with directing all the finance activities of the Madam Song Qing Ling Foundation, which was the major force behind raising funds for the Chinese war effort against the Japanese invasion during the Second World War. In 1936, J.M. Tan moved his accounting firm from Shanghai to Hong Kong because of the War. However, Oliver’s grandfather’s commitment to China did not end here. On October 1st 1949, J.M. Tan attended the Ceremony of the Establishment of the People’s Republic of China at the Tiananman City Gate as a specially invited guest. He had the honor of being elected as the only Chinese from Hong Kong as a member of the First People’s Political Consultative Conference. Most notably, he was a member of the special committee which designed what is today’s Flag of the People’s Republic of China.

In 1930, Oliver’s maternal great-grandfather, Wong Kam Fuk Esquire JP, received a Certificate of Honour in the name of His Majesty King George the Fifth, in recognition of the valuable services rendered by him to the then Colony of Hong Kong. ( A copy of the Certificate of Honour can be found by scrolling down, and an enlargeable version can be found by clicking here ).

M.K. Tan followed in his father’s footsteps in becoming a Chartered Accountant. In 1976, his firm merged with and became Kwan Wong Tan & Fong, the largest Chinese accounting firm in Hong Kong. In 1997, with almost 900 partners and staff, M.K. was also instrumental in the successful merger with Deloitte Touche Tohmatsu ( Deloitte ), and served as vice chairman between 1997-2002. One of his major engagements before he retired from Deloitte was his appointment as Joint Administrator of the largest and most complex probate cases in the history of Hong Kong. Today, Deloitte has over 7000 staff in China.

When China first opened up in 1978, M.K. realized the need to train internationally qualified PRC accountants. From 1982 onwards, he and his firm started a successful training program for hundreds of PRC trainees. In 1994, Madam Xie-Li-Juan, the then Vice Mayor of Shanghai, invited M.K. to assist the Shanghai Municipal Government in providing practical Western accounting and finance training in the Chinese language for over 200,000 management level personal in Shanghai. M.K.’s firm funded the entire program. Many of his former trainees are now working as either CFOs or Controllers for multi-national companies in China and abroad. In August 1996, Shanghai TV University awarded M.K. Honorary Visiting Professor status in recognition of his contributions. In 1998 this successful program was also introduced to the Chinese Central Radio and TV University, and the Chinese Educational TV Station ( CETV ). At its peak this program had examination centers throughout China with over 130,000 examinations to date.

Like his father before him, M.K. was a Member of the Chinese People’s Political Consultative Conference for over a 25 year period. Before 1997, he served as a member of the Selection Committee of the Hong Kong Special Administrative Region. He also acted as the Honorary Treasurer and Chairman of the Hong Kong Housing Society, an organization in which he was involved for over 20 years. Mr. Tan also served as an Independent Non-Executive Director of Harbour Centre Development Limited, Bank of East Asia Limited, and COFCO International Limited. 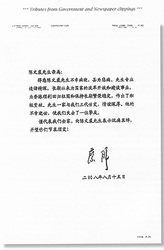 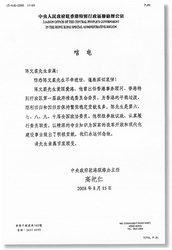 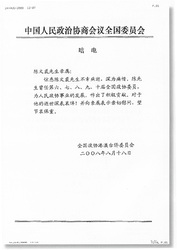 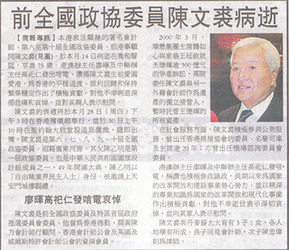 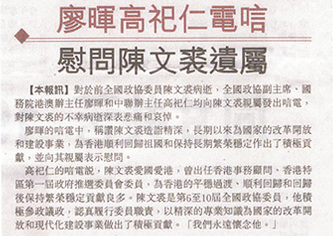